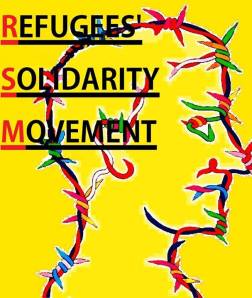 Refugees Solidarity Movement objects and condemns in the strongest possible terms to the continuing crackdown on activists, by the Egyptian government, and the atmosphere of fear that is being created in the country recently.

Two days ago, Lawyer, activist and Co-founder of the Refugees Solidarity Movement Mahienour El-Massry was detained to serve a sentence of “2” years in prison based on totally fictional reasons and allegations. Mahienour ElMassry sentenced for 2 years in prison for breaking the protest law, a law we don’t believe in and will continue fight against. We believe in the power of the people and the right we gained by blood to gain our normal rights of protesting and taking over our streets, and no one will take this right again from the Egyptian People. Moreover, Mahienour El-Massry was accused of assaulting a policeman, and destroying a police vehicle?! And despite the ridiculousness of such allegations, the Refugees Solidarity Movement will publish in the upcoming days, documents, photos and videos, showing who really got assaulted the day of the protest (a stand for late martyr Khaled Said) and who were the offender and the victim. After which we are sure, everyone will know, how fabricated are the allegations, and how corrupted is the judicial system.

Moreover, an hour ago, and after attending a solidarity press conference calling for freedom to Mahienour ElMassry, head of the medical team of the Refugees Solidarity Movement Dr. Taher Moukhtar was arrested together with about 15 Alexandrian activists, friends of Mahienour, and we still don’t know where he is being held.

Both Mahienour ElMassry and Taher Moukhtar worked tirelessly for more than 10 months with the Syrian and Palestinian refugees, exposing and putting the focus on their plight in Egypt after June 30th. Dr. Taher Moukhtar single handedly looked after and cured hundreds of medical cases of refugees detained for months in different Egyptian police stations without any charges.

The Photo attached below is from the day of the “Khaled Said” stand. The photo shows clearly Dr. Taher Moukhtar Beaten by a Policeman with a mask, and Mahienour El-Massy. Again we hop people see who is the offender and who is the victim. 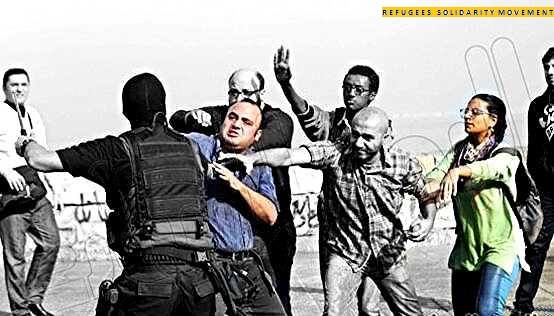