A familiar West Oakland mural (formerly on Mandela Parkway and 12th Street) commemorating the 1968 Olympics “power salute” was razed last week. In 1968, Olympic medal winners Tommie Smith and John Carlos, gold and bronze medalists in the 200m run, stood during the national anthem with their heads down and black-gloved fists raised.

At a press conference after the event Tommie Smith, who holds seven world records, said: “If I win I am an American, not a black American. But if I did something bad then they would say ‘a Negro’. We are black and we are proud of being black. Black America will understand what we did tonight.” Smith said he had raised his right fist to represent black power in America, while Carlos raised his left fist to represent black unity. Together they formed an arch of unity and power. He said the black scarf represented black pride and the black socks with no shoes stood for black poverty in racist America.- BBC

The West Oakland mural, sitting on a private lot, paid respects to this historical moment. It served a double purpose for the owner who commissioned the piece to prevent tagging. It seemed to have worked. No one who has graph-writing ethics would dishonor it. The city’s priorities don’t match graffiti artists’…but that’s common knowledge. Oakland Councilmember Lynnette McElheney tried to get constituent points on her Facebook when she heard the news:

Speaking with the contractors, this was removing State water testing tanks that were installed to monitor WO groundwater contamination levels at this site which was once a gas station. They told me that the water is now testing within normal ranges so the state ordered the removal of the tanks and testing equipment and the demolition of the shed. The mural was commissioned by the owner to keep the shed from being tagged.

She continued that she wasn’t notified and didn’t get there quickly enough to stop the demolition. 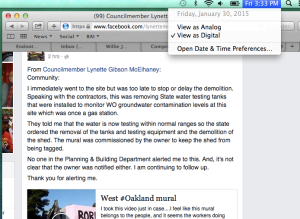 Nice try, McElheney. You hold the pen in drafting the demolition of West Oakland, aka the West Oakland Specific Plan [Read about WOSP here]. (And yes, they actually named that shit “wosp.”) Do you think you’re gonna convince us that the preservation of anything that is part of this historical neighborhood or a tribute to the struggle is suddenly your top priority? We already know what your priority is. It is not preservation of history or community. It is development.

McElhaney also says that people are unrealistic about development prospects. Developers want to build in San Francisco, but they do not want to build in Oakland, she said. The only one willing to build in the city are Oakland-based developers…“Oakland can’t beg a developer to come to the city right now. But the reality is that you can’t get (developers) to come here without incentivizing the development.” – The Post News Group, 17 July 2014

Development, by overlapping institutions of state, capitalism and white supremacy, destroys community. And the successful destruction of a community requires a short memory of the resistance that went before us. Whether every moving part of the gentrification process is deliberate or not, these small events are certainly part of the nature of the beast. A politician is a politician is a businesswoman. This is the mural after the message was changed a few years back. The image stayed the same:

West Oakland kids before the mural was torn down

This more recent wording came from Rage Against the Machine’s “Know Your Enemy:”

…Born with insight and a raised fist A witness to the slit wrist, that’s with As we move into ’92 Still in a room without a view Ya got to know Ya got to know That when I say go, go, go Amp up and amplify Defy I’m a brother with a furious mind Action must be taken We don’t need the key We’ll break in Something must be done About vengeance, a badge and a gun…