On the morning of Sept 26th, Janice Li, a candidate for the Bay Area Rapid Transit Board of Directors, released photos showing a line of eight armed, uniformed DHS officials walking through the aisles on a BART train at Civic Center station in downtown San Francisco causing a panic among some passengers.

Another group of DHS officers were seen milling about at Powell station as well.

Although BART claims there is no reason to be alarmed and that these are “routine” anti-terror coordinations between the two agencies, but as been proven in  the past BART and DHS simply can’t be trusted.

From 2008 until 2015, I regularly engaged in copwatching of BART police and DHS activities in the Bay Area Rapid Transit system. The following is a detailed look at how BART and DHS collaborated to shutdown protests by using infiltration and illegal measures to shutdown cell phone communications during protests.

On the evening of July 3, 2011, a houseless man by the name of Charles Blair Hill got off a BART train at San Francisco’s Civic Center station and was confronted by two BART police officers; Myron Lee and James Cromwell.

Less than a minute later, Charles Hill was laying on the floor dead, shot multiple times by Officer James Cromwell.

As news of the story spread, Bay Area-based activists with “No Justice, No BART!“– a group created in response to the murder of Oscar Grant two years earlier–started meeting to respond to yet another senseless police murder.

For weeks in a row, demonstrators stopped trains with their bodies, marched up and down Market street in downtown San Francisco and brought public transportation to a halt.

Panicked BART administrators, BART police and the Department of Homeland Security scrambled to squash the demonstrations: they hatched an ill-fated plan to cut off cell phones and communications in BART stations so demonstrators could not communicate with one another. Little did they know that no one was even gathering that day.

An undercover cop or police informant had been trying to join No Justice No BART meetings and was purposely misled by protesters to believe a major action was going to take place – to which none of us and any intention of going to.

This DHS and BART police plan only angered local media and caught the attention of the international press, consequently drawing in the hacker group ” Anonymous.” Soon, a wide array of demonstrators outside the typical anti-police/anti-police brutality Bay Area circles were mobilizing. (This was really fucking annoying to have hacker activists trying to lead street demonstrations and chanting about silly things, but the numbers were useful.)

This was not the only trick that BART police and DHS had cooked up.

Early on in these demonstrations, two men wearing masks unfamiliar to myself and other long-time organizers, were spotted and we began keeping an eye on them. The men mostly kept to themselves and did not interact with any other protestorss who showed up week after week, but suspicions alone were not enough proof to publicly call-out the pair and shame them out of the protests.

On the night of August 22, a rag tag group of demonstrators played cat-and-mouse around San Francisco with a tired and angry platoon of riot police in tow. An unknown voice from the crowd shouted out a call to storm City Hall.  Moments before this, one of the suspected undercover cops was seen texting instead of fleeing police–something he had been spotted doing throughout the day. The march was eventually kettled and attacked at Larkin and Grove Streets near the library a block away from City Hall. The suspicion was that the masked stranger had set it up.

While lined up against the wall of the library, waiting to be handcuffed and arrested, the two suspected undercover cops whispered back and forth to each other about their need to call “Uncle.” Shortly after, the police grabbed one of the two, so that he could be handcuffed and placed in the paddy wagon. But first, he was unmasked by San Francisco Police. He immediately leaned out and whispered to the arresting police before being whisked away, out of sight.

The rest of the arrestees were taken to 850 Bryant. The two masked men were nowhere in sight.

For nearly a year, the two seemed to have disappeared from demonstrations before being spotted again–this time in downtown Oakland during May Day 2012.  The men were both dressed the same and wearing masks. Our suspicion was that the two were some type of federal officers (due to the fact they were in two different cities) or at least working with DHS since this type of activity for BART was out of the ordinary.

About two years later, I spotted the one of the two “protestors” Hayward BART station. This time of the previously masked man was in full police uniform and harassing a person of color.

I first went to film the pig because he was harassing a man for no reason, but after recognizing him from demonstrations and from the video of his SFPD unmasking, I began to confront the BART pig, which is now known as Officer Christopher Vogan. 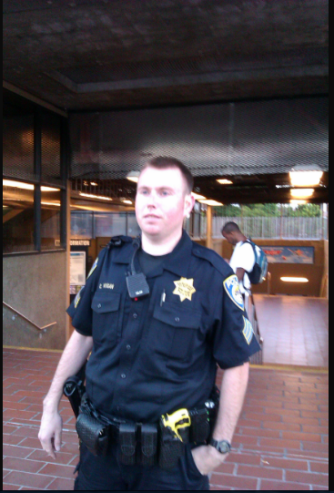 I approached the pig while snapping photos of him with a cell phone camera and shouting “Hey! I know you! I been looking for your punk ass for three years!” The officer looked back in confusion, bumbling his words.

Without letting the pig speak, I continued to confront the pig.

“You like to do undercover work?! You liked to wear masks Motherf**ker?! well I gotchu now Motherf**ker! You’re gonna be all over the internet in a few days! hahahaha” before taking off and leaving the BART pig speechless, embarrassed and exposed.

This is not the only evidence of BART police and DHS collaboration in supposed “anti-terrorism” cooperations that have nothing to do with terrorism and everything to do allocating resources for more sinister operations, like infiltrations of local protest movements and other undercover operations.

In this video from Septemeber 19th, 2014, I chased down a DHS officer who was gathered at Powell street station with BART officer. Clearly the officer fleeing me and my camera was worried about his face being shown on video, but as a public officer in uniform why run as if your life depended on it? I suggest its because the DHS officer was also planning on working undercover within the BART sysstem.

The DHS can not be trusted to simply enact “anti-terrorism” patrol and this is clearly spelled out for you here in this article. Its important to understand that in the age of War on Terror, that if you are in opposition in this time, you are the “terror” that DHS is coming for.