Posted in Upside Down World

Mexico has not been the same since the forced disappearance in Iguala, Guerrero of 43 Normalista students from the Ayotzinapa Rural Teachers College on September 26, 2014.  Hundreds of thousands of people have taken to the streets to demand that the students be returned alive and also to denounce political corruption and the “Narco-Government.” The Southern state of Guerrero has been the epicenter of these protests and a wide range of actions including citizen searches, takeovers of tollbooths, a statewide caravan, the burning of government buildings, and more.

Since the disappearance of 43 students from the Raul Isidro Burgos Ayotzinapa School and the extrajudicial killing of 3 students, Julio Cesar Ramirez Nava, Daniel Solis Gallardo and Julio Cesar Mondragon at the hands of the police, students have suspended classes.

With photos of their missing children in hand, family members of the Ayotzinapa students marched in Acapulco a little over one month after the disappearance of their children. The involvement of municipal police in the attack has led the phrases “It was the state” and “narco-state” to become popular vernacular. END_OF_DOCUMENT_TOKEN_TO_BE_REPLACED

Check out their Facebook page for updates on the call to action here.

From #USTired2: Stop the US Government’s Deadly Plan Mexico 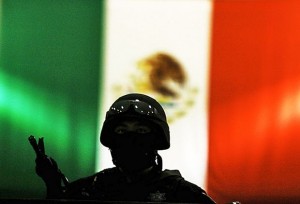 For too many people living in the United States, it has been easy to ignore what’s happening in Mexico. But the plain truth is that the money that’s fueling this war is coming from one place: the United States. And it’s our job to stop it.

First, of course, there is the amount of money that drug traffickers make selling narcotics, marijuana, and amphetamines here in the U.S.: even conservative estimates put this at $30 billion each year. The drug trade is so profitable that one UN official argued that during the global banking crisis in 2008, drug money was the only thing keeping the world banking system afloat. So the drug habits of people here in the U.S. are making billions of dollars for the cartels—and therefore for the big international banks—every year, providing the monetary incentives for the kind of graft and corruption that has infected the Mexican state from top to bottom. Our love of cocaine and pot is fueling the disintegration of the entire Mexican political structure.

Read the rest of the article here.

Alive they were taken, alive we want them back! Justice for the Ayotzinapa 43 & all victims of the war in Mexico! Here in the US we are tired too

On September 26th and 27th in Iguala, Guerrero, 43 students of the rural teachers school “Raul Isidro Burgos” in the nearby town of Ayotzinapa, were kidnapped by local police officers with the aid of hooded men from the drug cartel “Guerreros Unidos”. Another six people, including three more students of Ayotzinapa, were killed. The response of the local, state, and federal authorities has not just been mediocre and inept, but also seemingly complicit. The State’s actions show the level of corruption, incompetence, and disdain of Mexican authorities towards the many thousands of people who have been killed and disappeared. Social protests have erupted throughout Mexico, with massive demonstrations that have sparked a light for hope and justice.

Here in the United States we feel their pain and share their anger. WE ARE TIRED TOO.

On December 3rd, 2014, we will go out into the streets and demand the US government to abide by the Leahy Law and to stop military assistance to the Mexican government, which flagrantly violates human rights with total impunity. Join us in sending two powerful messages to Mexico: To the people of Mexico, you are not alone. To the Mexican government, the world is watching you.

Watch this website, in progress for more updates here.

And the Facebook page for updates and news here.