For Background  read: Protestors to Police: No Christmas For You!

END_OF_DOCUMENT_TOKEN_TO_BE_REPLACED

Collaboration by We Copwatch and Bay Area Intifada,

On Saturday morning, community members, with the blessings of Triangle Park residents, removed a fence put up by the the city just days before. The park is a community space where people mingle, snooze, break bread, play chess and–for some homeless people–can finally rest their feet. The city put up the fence to push park residents and visitors out of the community gathering space, angering park residents, nearby neighbors and other Oaklanders. People are drawing a clear connection between the fence and the city’s ongoing efforts to gentrify Oakland through the displacement, murder and harassment of black, brown and homeless communities.

On the way to the park, a couple of community members talked to Bay Area Intifada about the significance of the fence:

Another community member talked about why we should support the people at the park: END_OF_DOCUMENT_TOKEN_TO_BE_REPLACED

We were lined up zip-tied in Santa Rita, the seven of us searched, stripped and patted down. 23 was the only other person of color arrested with me that day, a young black man who spent the bus ride over heckling the California highway patrol officers to the best of his ability. I told 23 in the bus ride over, “If you think CHP are a bunch of fucking pricks, wait till you meet the correctional officers. If you talk shit to them like you just talked shit to the CHP they will drag your ass into a little room and beat the fuck out of you.”

He said, “I appreciate the advice, but you do things your way, and I’ll do things mine, if I die in here, tell them my name is 23.”

When we were marched out and lined up, 23 resisted, a cop laughed, and slammed his face into a wall, seven or so officers grabbed him and dragged him kicking and screaming into a little room. “I’m not resisting!” he screamed through the sound of beatings. Consecutive sounds of flesh smacking against bone and concrete like a round of applause, their microphones’ were on, and connected to the sound system in the hallway we were kept in. We heard everything. The screams echoed through all of the halls of the cell.

The cops were laughing, yelling to one another, “Turn your damn microphones off!”

One officer paced behind us and calmly said,
“Me, I hate violence. Honestly, I am a pacifist. But if you give us trouble, you’ll end up like him. Now if you just behave, you won’t have to end up like him. What else can I do? If me or my officers are put in danger, I’ll have my hands tied, I’ll have no choice.”

Interesting that he said “hands tied” eh? Oh yes officer. Never has the narrative of the state been so clear to me. Oh officer, I praise your honesty. Your lynchings do not go unnoticed. Black is the bottom; it is of no coincidence that you made an example of 23, just as you did of other black youths. My upward mobility as a yellow fellow depends on how far I can push black people down. Black is perpetually made example of. I am juxtaposed to black objecthood. If I decide to join them, my wretched little lot and I will end up like them. I get it now. Never has your message been so clear to me. Oh yes, my honest pig, preaches nonviolence. Maintaining order depends upon systematic black death, that is the central logic of anti-blackness, of black objecthood of black social and material death. My assigned API identity is dependent upon the example made with black death. The line is drawn.

A new political climate, the stage is set.

Yes, do you hear it? The background is moving, the stage props are shaking, they are growing feet, little beady eyes taking form, they are living now, and taking center stage, and devouring the actors alive.

How does one honor the call to “black out black Friday” for Mike Brown & Ferguson, to Boycott Walmart and to connect all the dots by showing solidarity w/ Palestine and BDS? Here’s How:

In the Bay Area protestors know how to be creative. In the past week since the acquittal of Darren Wilson in the murder of Mike Brown demonstrations have moved away from symbolism to strategy through diversifying tactics: END_OF_DOCUMENT_TOKEN_TO_BE_REPLACED

“A new formation has started in the bay area….a multi racial, multi generational group of organizations, individuals and families coming together to dismantle police terror. No longer on just the defense reacting to every attocity by the pigs. We also going on the offensive. Come to the General meetings every third Thursday at Eastside Arts Alliance to find out what we talking about and how to get down.”

In an interview with The Electronic Intifada on Tuesday, contributor Charlotte Silver said that “for a lot of the activists who were organizing the rallies outside the courthouse every day, who have been organizing really across the country in support of Rasmea for this past year, they are very aware that this is an attack on their community.”

In downtown Oakland today, activists chained themselves to the federal courthouse, condemning the trial as one that was politically-motivated in an attempt by the US government to silence Palestine solidarity activism around the country. The five activists were arrested by local police just hours after their protest began. They were cited and released.

In a recent press release, the US Palestinian Community Network states that “Activists in the [San Francisco] Bay Area will continue to protest, and vow to intensify their efforts until Odeh is released … The case against Odeh was originally part of a larger federal investigation in Chicago and Minneapolis,” USPCN adds, where the US government has led a probe of Palestine solidarity activists and Palestinian community organizers in the Midwest… 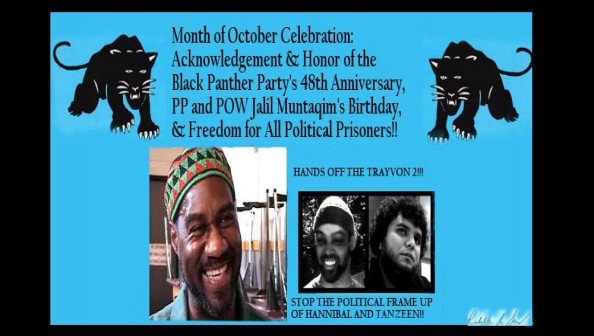 From Ferguson, to Gaza Back to Oakland, All Power to the People!
Please Join us for the 48th Anniversary for the Black Panther Party, Political Prisoner/P.O.W. Jalil Muntaqim’s Birthday, & Solidarity for the Trayvon 2.

END_OF_DOCUMENT_TOKEN_TO_BE_REPLACED

[Update:] On the fifth day that autonomously- organized protesters returned to picket, the Zim ship finally sailed out to Tacoma. Despite some official reports, only a tiny portion of the shipment intended for Oakland ports was unloaded (This was witnessed by dockworkers, a Ports of America worker, a port trucker, vigilant protesters on the ground and our own contributor here at Bay Area Intifada).

For the third consecutive day, an Israeli ship, the Zim Pireaus, has been blockaded by Bay Area protesters in solidarity with Gaza. In the wee hours of Monday morning, with very little mobilization, a dozen or so people held a picket. With the support of longshore workers, the ship–which had already been delayed for two days at the Port of Oakland–sat unloaded. [Read details, watch videos and see photos from Saturday and Sunday blockades here.]

In the evening, enough people came through to create pickets. Though police officers pushed a pathway through protesters, longshore workers again refused to cross the pickets. It is yet to be determined how much the blockade has cost Israel.

Adam and Ankash were part of the bike block and had been riding to the port the last three days. They spoke with us on the blockade, Gaza and colonization. END_OF_DOCUMENT_TOKEN_TO_BE_REPLACED

Ferguson To Oakland : Get Free

From Justice for [Fill in the Blank]

On Friday August 15th Oakland residents took to the streets in solidarity with those resisting police violence in Ferguson, Missouri. Here’s a short video of what took place:

Support Tanzeen and Hannibal at the last Trayvon 2 court date before the trial begins in June! Davis people can demonstrate their support by organizing rides to the courthouse.

WHEN: Wednesday (5/21) at 8:30 AM
WHERE: Department 104, Wiley Manuel Courthouse in Oakland
FOR MORE INFORMATION: thetrayvon2.wordpress.com

This is the DA’s last chance to drop all charges and discontinue the case before trial time. While the judge dropped Hannibal and Tanzeen’s charges to misdemeanors at the last court date, both men are still facing a potential year of incarceration, fines, and/or other punitive measures. Let’s keep the court support going strong so the Trayvon 2 can ditch these bogus charges altogether!