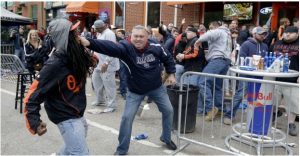 Thousands of protesters took to the streets Saturday in the largest Freddie Gray rally yet, and after hours of peaceful demonstrations, pockets of protesters smashed out police car windows and storefronts after they were provoked by suspected white supremacist sports spectators who were in the area for a baseball game.

Racial tensions  are already high over the death of an innocent,unarmed Black man named Freddie Gray. Gray died April 19 after suffering a fatal spinal injury while in police custody. Authorities have not explained how or when Gray’s spine was injured. Police have said Gray should have received medical attention at the spot where he was arrested before he was put inside a police transport van handcuffed and without a seat belt, a violation of the department’s policy.